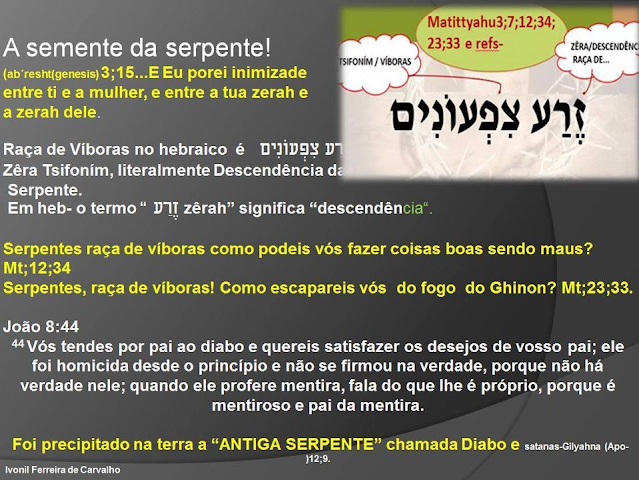 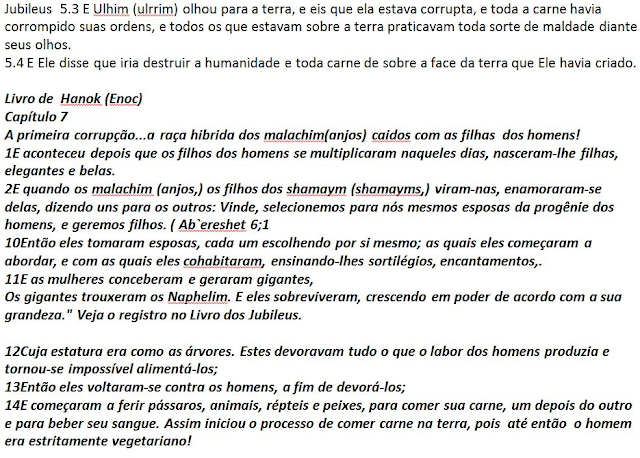 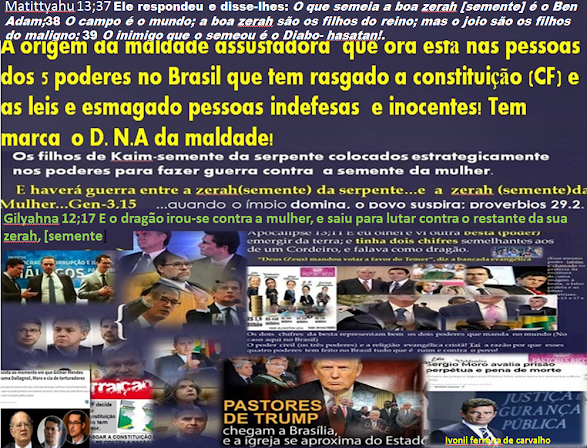 Many unanswered questions about the Flood and the destruction of all living (except Noach and family) on earth at the time! they are! 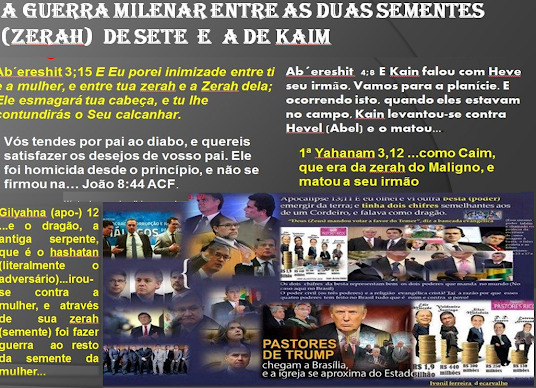 What really was the corruption of the human race!
And why were the animals also destroyed?
ANSWERS!
Jubilees 5.3 And Ulhim (ulrrim) looked upon the land, and, behold, it was corrupt, and all flesh had corrupted her orders, and all that were upon the earth were doing every sort of wickedness before her eyes.
5.4 And He said He would destroy mankind and all flesh from off the face of the earth that He had created.
Book of Hanok (Enoc)
Chapter 7
The first corruption...the hybrid race of malachim (angels) fallen with the daughters of men!
1And it came to pass after the sons of men multiplied in those days, daughters were born to him, elegant and beautiful.
2And when the malachim (angels,) the sons of the shamaym (shamayms,) saw them, they fell in love with them, saying to one another: Come, let us select for ourselves wives from the offspring of men, and we shall bear children. (Ab`ershet 6.1
10Then they took wives, each one choosing for himself; which they began to approach, and with which they cohabited, teaching them spells, incantations,.
11And the women conceived and begat giants,
The giants brought the Naphelim. And they survived, growing in power according to their greatness.” See the record in the Book of Jubilees.
12Whose stature was like the trees. These devoured everything that the labor of men produced and it became impossible to feed them;
13Then they turned against men to devour them;
14And they began to smite birds, beasts, reptiles and fish, to eat their flesh, one after another, and to drink their blood. Thus began the process of eating meat on earth, because until then man was strictly vegetarian!
Book of Yahshar; (righteous)5;5 And all who followed the Sovereign died in those days, before seeing the evil (Flood) that Ulhim (ulrrim) was going to bring upon the earth.
6 And after the course of many years, in the year 480 of the life of Noah, when all the men who followed the Sovereign had died, and only Methuselah was left, Ulhim (Ulrrim) spoke to Noach (Noah) and to Methuselah, saying :
7 Speak, and declare unto the children of men, saying, Thus saith the Sovereign, repent of your evil ways, and forsake your works, and the Sovereign will repent of the evil which he hath declared to do against you, that doesn't happen.

The corruption of the breed hybrids with animals!
"AMALGAMATION:
ELLEN G. WHITE STATEMENTS REGARDING FLOOD CONDITIONS By Francis D. Nichol In the summer of 1864, the “Steam Press of the Seventh-day Adventist Publishing Association” of Battle Creek, Michigan, published by Ellen G. White, a three-hundred-page volume entitled "Important Facts of the Faith in Connection with the History of the Holy Men of the Past." This was the third in a four-volume series whose general title is Spiritual Gifts. In this work the narrative of the history of the beginning of the world is presented, beginning with “The Creation” and extending to the bestowal of the law on Israel, and these matters, as the author declares in the Preface, were shown to her in vision. In chapter 6, entitled "Crime Before the Flood," Mrs. White, in describing the deplorable conditions that led to the catastrophic destruction of the world, speaks of the amalgamation of man and beast."
"Describing a great sin, Mrs. White reported:
"But if there is one sin above all others that brought about the destruction of the race by the flood, it was the debasing crime of the amalgamation of man and beast that distorted the image of Ulhim and caused confusion everywhere." (Spiritual Gifts, Vol. 3, pg.64, 1864).
“Every kind of animal that Ulhim (ulrrim) created and remained pure was preserved in the ark. The confused species that Ulhim (ulrrim) had not created, resulting from the amalgamation, were destroyed by the flood...” (Spiritual Gifts, Vol. 3, pg. 75, 1864)." 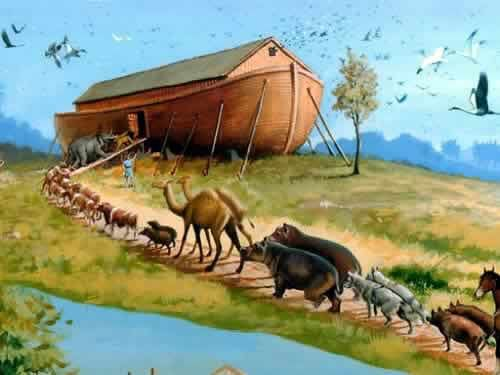 Then Ulhim declared, “I will make disappear from the surface of the ground the beings that I have created, all men; the large animals to the small beings...AB'resht 6;7. 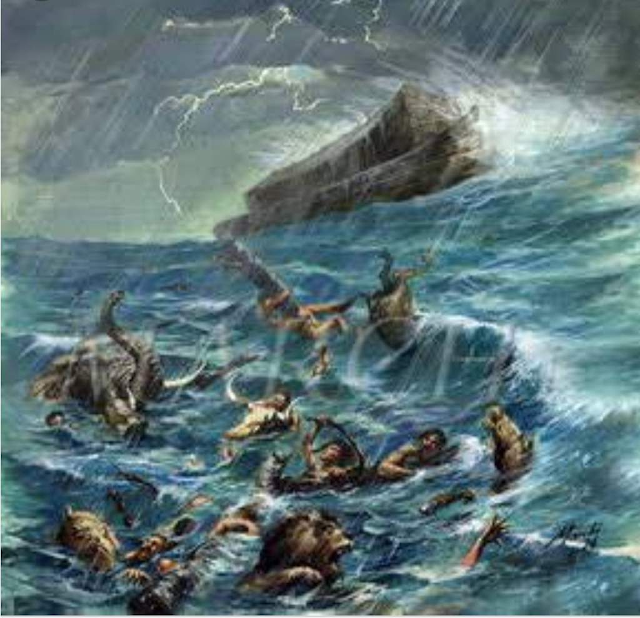 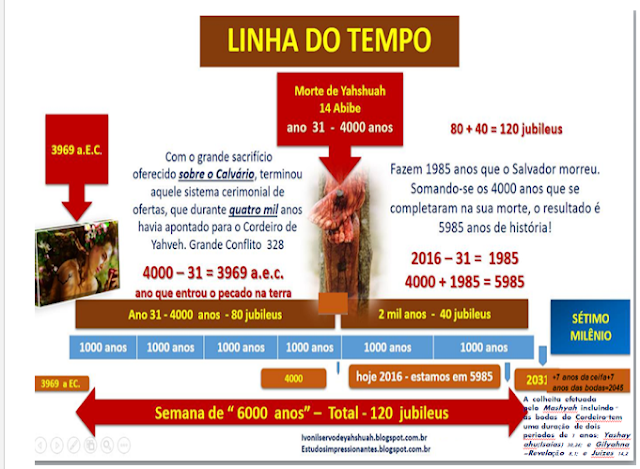 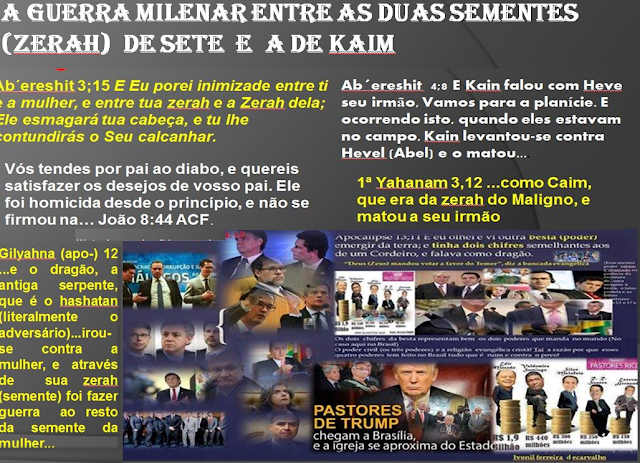 In Mattytiahu (Matthew) 24:36, Yahshuah declared that the end only the Abba=Father knew when it would be. However, in verse 37 of the same chapter, Yahshuah reports that... this splendid event... will be like it happened in the days of Noach (Noah). In the days before the Flood, the people lived eating, drinking, and marrying...until the day Noach entered the ark; and they didn't notice anything, until the Flood came and dragged them all away. It'll be just that way when the son of man comes. Now, it is known that, in the time of Noach, thousands of people were surprised and destroyed by the waters of the Flood.
However, it is well known to all readers of the kadoshim Scriptures that the servants of YHWH The Eternal were not taken by surprise. Since they were previously warned by Yahveh Ulhim himself, who does nothing without first warning his prophets as already explained.
Thus...Noach divinely warned of things not yet seen, feared, and for the salvation of his household prepared the ark; Hebrews 11,7. 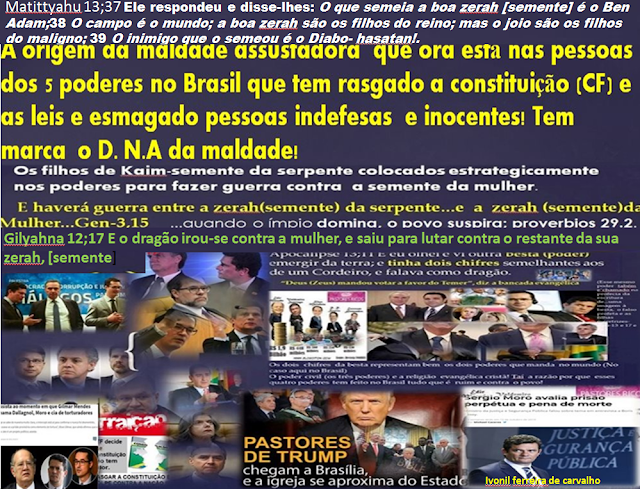 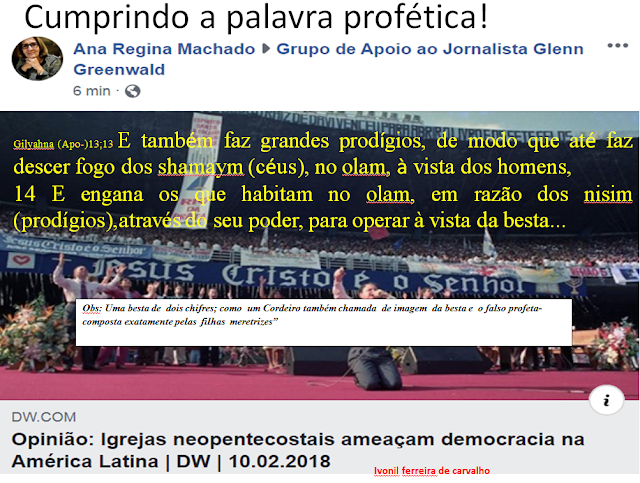 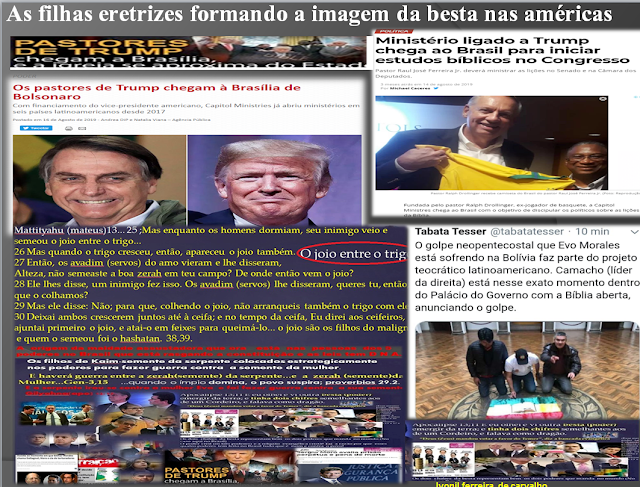 (AB'reshit (genesis) 6;4 And the Nephilim began to exist on earth in those days, when the sons of Ulhim came to the daughters of men, and they begot their sons, they became mighty men, who were the men of fame of antiquity)
"From this union of malachim (fallen sentries) with the daughters of men came the hybrid race of giants, the Nephilim!"
(AB'resht 1;27 Thus the Word of Ulhim created the ishíh [man] in His own image, in the image of Ulhim He created him, ishíh [man] and ishah [woman] He created him.
28 And Ulhim blessed them, and Ulhim spake unto them, Be fruitful, multiply and fill the earth, and subdue it, and have dominion over the fish of the sea, and over the fowl of the air, and over every living thing that is moves over the earth.
29 And Ulhim said: Behold! I give you every herb that gives zerah, [seed] which are on the face of all the earth, and every tree, which is the fruit of a tree that produces zerah, for you) this be for food.
Chapter 9
1Then Migayah, Gabryah, RadaUL, SuryaUl, UrieUl, looked down from the Shamaym, and saw the amount of blood that was shed on the earth, and all the iniquity that was done upon it, and said to one another; This is the voice of their cries;
Chapter 10
1Then the Most High, the Great and eternal kadosh spoke,
2And he sent Arsayalalyur (12) to the son of Lamech-Hanok.
4Then he explained to him the consummation that is about to take place; for all the earth shall perish; the waters of a flood shall come upon the inhabited earth, and all that are in it shall be destroyed
5 the Sovereign said to me: O Chanoch, scribe of righteousness, go and tell the Watchers of the shamayms, who have deserted the high shamaym and its holy and eternal state, who have been defiled with women.
6 For they will not rejoice in their seed; they will see the slaughter of their loved ones; will mourn the destruction of their children
5And now teach him (son of Lamech -Hanok) how he can escape, and how his seed can remain in all the earth.
18 destroys all...the offspring of the Watchers, for they tyrannize mankind.
Their descent (zerah) continues with the same evil spirit! Taking power by force and leaving thousands in disgrace! 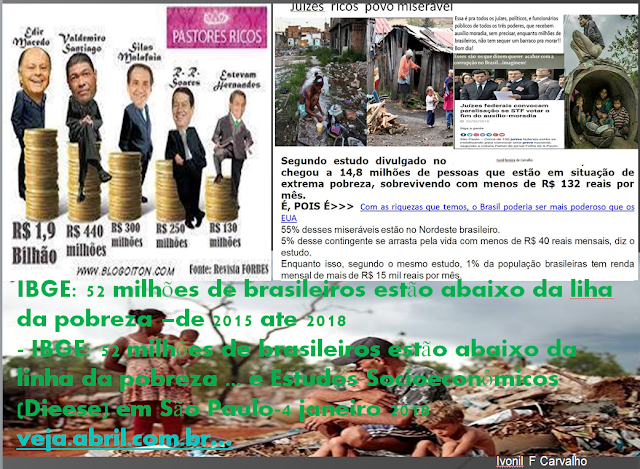 ch- 8;2 Impiety was increased, fornication multiplied; and they transgressed and corrupted all their ways. 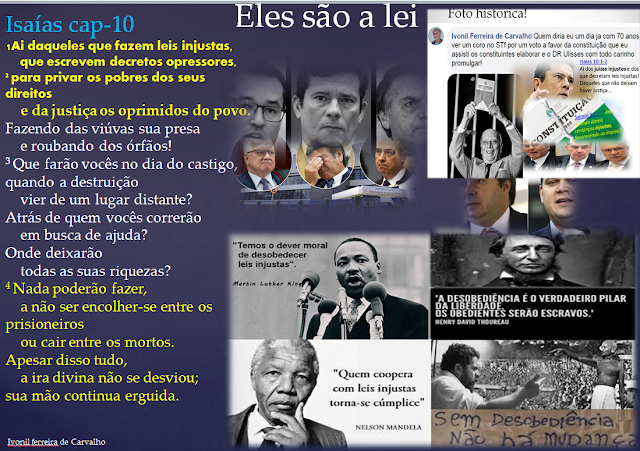 Nephilim (Hebrew:. נְפִילִים)
Hybrid race of the sentries of the shamayim (fallen angels) with the daughters of men... this tyrannical elite that dominates the world is part of this serpent seed...
[Tumblers; Those Who Make [Others] Fall].
This is a transliteration of the Hebrew word nephi·lim, plural in its occurrences in katvay (Ge 6:4; Nu 13:33 [twice]). , as found, for example, at 2 Kings 3:19; 19:7
Nephilim (Hebrew: נְפִילִים) term derived from the Hebrew naphal (he fell), is a term that... The sons of Ulhim (Ulrrim) are the Nephilim, a hybrid race, born to the earth. 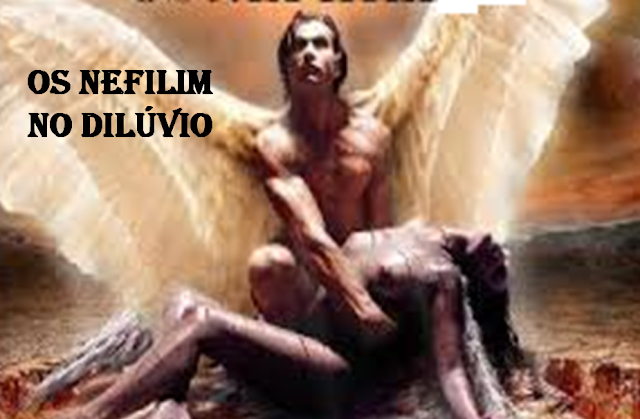 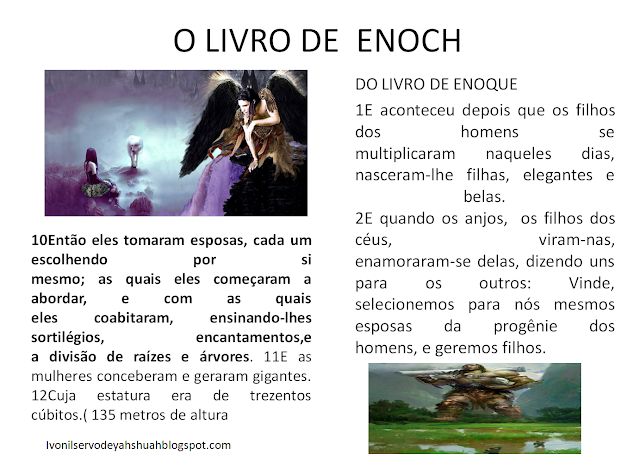 Ao mencionar que  vesperando sua Yahshuah hamashyah said that awaiting his return to earth, the world would be like in the days of Noach, evidenced that the sons of the serpent's seed the hybrid race descended from the sentries of the Shamayim with the daughters of men... at the end of the story would be in a war trying for the last time to definitively take possession of the land...And the dragon was angry with the woman, and went to make war against the remnants of her seed...Gilyahna (Apo-) 12;17.
Many find it strange so much evil on earth among its inhabitants, because they do not know the true story of this millenary war between the two seeds! Which comes from Edem...AB'ereshit (genesis) 3;14;15 And Yahveh said to the serpent...I will put enmity between you and Ishah (woman) ), and between your zerah (offspring) and Zerah (offspring) of her...
There was a sentence by Ulhim (Ulrrim) about a war between the two offspring...if there were not the two seeds (zerah) there would be no need for such a sentence, of course!
"The wife of Noah; Ab'ereshit (Genesis) 6:18; 7:7, 13; 8:16, 18), according to the Jewish rabbinical tradition, is called Noema or Naamá (Na'amah - full of beauty) a Canaanite woman. There are those who identify her as coming from the descendants of Cain, being the sister of Tubalkaim who was the son of Lamech...her name is not mentioned in the Pentateuch or the Torah, in the story of Noah. his name is known as Enzara"
There is an interesting fact about the marriage of the Lamb to his bride=Kehilah. In the book of Gyliahna=Revelation 19, 9; Yachanam (John)... reports... And the malach (angel) told me; Write; How happy are those who have been invited to the Lamb's wedding feast. And added; These are words of Yahveh. It is common knowledge that for someone to attend an important wedding party; it is necessary that this someone receive an invitation from the bride and groom; And of course it is in this invitation that the data about the wedding party comes. Examples; names of the bride and groom, place and especially the date of marriage; Without which there is no possibility for the guest to attend such a party. Have you already received this invitation?
This feast of the marriage of the Lamb with his bride is also represented at the opening of the 7th seal... and having opened the 7th seal there was silence in the shamaym=sky, almost half an hour; Prophetic half an hour is 7 and a half days; almost half an hour equals 7 days in prophetic time, which is 7 years. In the Parusiah of the Mashyah all the holy angels will come with Him; Mattythiah 25.31. 2nd Thess, 1.7. and refs. And the angelic hosts departing from heaven; there will necessarily be there; silence for almost half an hour.Without the prophetic vision, the people are out of control...and the prophetic word...is...lamp to my feet and a light to my path...and...a light that shines in a dark place... Mishlei (Proverbs) 29,18; Tehillim (Psalms) 119, 105. and 2nd kefah (Peter)1
Ivonil blacksmith de Carvalho
Postado por Ivonil servo de Yahshuah às 12:54