Ulhim (ULRRIM) formed the man from the dust of the earth ... this is because the land where we live is the only place in the solar system where all the chemical elements that exist in the human body - around 60! 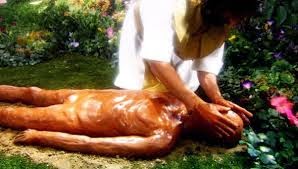 AB´ereshit (Genesis) 2; 21 Then the sovereign yahveh caused a heavy sleep to fall on Adam, general anesthesia, and he fell asleep; he then took one of his ribs where the genetic material is found inside the red bone marrow where we find stem cells from the marrow of the rib-, and closed the meat in its place-perfect plastic surgery-22 and the rib-stem cell - that the sovereign yahveh had taken from him, formed the woman and brought her to adam. 23 Then he said, This is now bone (substance) of my bones, and flesh of my flesh; it will be called ISHAH (man,) because ISHI (man) was taken. ”
The narrative of the creation of ulhim (ulrrim) is so perfect that he formed Adam from the dust of the earth with X_Y chromosomes ... and Havah (Eva) from a stem cell where YHVH-YAHWEH made a clone of man with a interesting difference!
I man, as we said, owns the X and Y chromosomes, the Woman already has the XX chromosomes, she doesn’t have the Y ... for ulhim to create the woman of the man, he just had to duplicate the XX ... woman first why then he would have to create Y from nothing. In other words, double work ... interesting isn't it?

In the rib is the red bone marrow (marrow) where it contains stem cells ...

Biologists have been fascinated since the founding of cell theory in 1839 by the German physiologist Theodor Schwann, the ability of life to generate a complete adult organism from just one cell. The question posed by Hans Spemann (1869-1941), in 1938, paved the way and created an obligation to respond consistently to the quality of scientific inquiry: "the nucleus of a totally differentiated cell would be capable of generating a normal adult individual, if transplanted into an enucleated egg? ".

All over the world, scientific experiments with sheep, mice, and calves are spreading, including in Brazil, showed, starting in 1996, the year of Dolly's cloning in Scotland, that the question that reiterated in our time, was absolutely correct, but, also, that the answer was good and that the enigma of life found a new and exciting formulation.

Currently, research with adult and embryonic stem cells, in addition to the controversial issues that open up, from an ethical and legal-legal point of view, contributing enormously to the intricate elaboration of the social fictions of the world in which we live, they bring to that same world the hope of promises of new medical therapies in a world so corrupted and degenerate in this field of diseases, epidemics, accentuated endemics, and they are increasingly making programs of genetic manipulation and bioengineering, in search of possible medicinal cures .

Stem cells are present from embryonic life to adulthood, and probably until our death. They are responsible for the formation of the embryo and also for the maintenance of tissues in adult life. At the beginning of embryonic life, stem cells are virtually totipotent, that is, they have the capacity to generate any tissues in the body. However, after the formation of the embryo itself, several tissues maintain stem cells that participate in normal physiology (and pathology as well) in adulthood.

Conceptually, stem cells have two fundamental characteristics: 1) unlimited self-renewal, for example, the ability to multiply generating cells equal to the original cell throughout life, and; 2) pluripotency, such as the ability to generate different cell types. 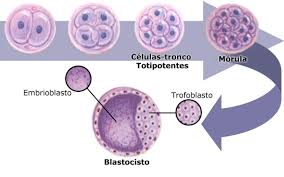 Although they exist in low frequency, their numbers are sufficient to maintain the tissues that need constant renewal. In some systems where they are well characterized, their frequency is estimated at 1 per 100,000 total cells in that tissue. Stem cells, as they divide, generate compromised parents, with an even more limited proliferation capacity and a limited potential for differentiation due to their commitment to a single cell line. From this point on, this already compromised cell called a precursor, already has defined morphology and its proliferative potential is limited or even null.

This is now bone (substance) of my bones,

and flesh of my flesh


When I was young in my first Biology class I remember my teacher saying how absurd it was for someone to believe in the possibility of a piece of bone forming a human being, this he was referring to in the passage Bereshit (Genesis) 2: 21-23: “21 Then the sovereign yahveh caused a heavy sleep to fall on ISHI (man,) and he fell asleep; then he took one of the ribs and closed the meat in its place; 22 and the rib that